The Truth about the Samoan Tattoo (Tatau) – Part III

At long last, I’m finally back with Part 3 of this series of posts about the Samoan tattoo.

If you haven’t already, please check out previous articles on this topic:

In those earlier posts, we looked at the origin legend of the Samoan tattoo, as expressed in an old Samoan chant.

We also talked about the symbols in the malofie/pe’a and malu tattoos, and we’ve got a passionate conversation still going (in the comments) about who should and shouldn’t be allowed to receive traditional Samoan ink.

While that discussion wages on, let’s turn our focus and have a look at how you would go about getting a traditional Samoan tattoo (tatau).

So you’ve got deep love for your Samoan heritage, a passion to learn our culture, and you’ve decided that you want to commit the rest of your life – i.e. your body – to the expression of your Samoan pride.

What do you do now?

The traditions of a Samoan tattoo

Back in the old days, a young man would approach his father (or strongest father figure) to express his interest in getting a pe’a tattoo.

This father would usually react with joy, especially if his son was a good boy – respectful, hardworking at school, diligent with his church, family and village responsibilities, etc.

This father would know that the honour of a malofie doesn’t come cheap, so he would ideally have the means – i.e. fine mats, siapo, livestock, crop, or other goods – ready to trade.

If this father was not as blessed with material wealth, he might counsel with the matai in his family, who are usually happy to contribute towards creating another soga’imiti in the village.

And then it’s time for the young man’s father to find a tufuga ta tatau, a master in the art of the traditional Samoan tattoo.

My late teacher of Samoan culture, Tanuvasa Tofaeono Tavale, said it’s always best to go to a tufuga in your family. A stranger might not care as much about the quality and symbolism in your tattoo, he reasoned.

If that’s not possible, find a tufuga who has a good understanding of your family lineage because this should reflect in the patterns of a pe’a tattoo.

Of course, you’ll also want to find a tattooist with the highest level of skill (that you can afford). They’ll be known by reputation.

So the young man’s father would ask around before choosing a suitable tattooist. They would talk, negotiate a price, make an agreement, and then the father would give the tufuga an intricately woven fine mat, rolled up tight and bound with a strip of fabric. This is called a fusita.

A fusita is like a down payment – a deposit so the craftsman can begin his work. It’s a promise that the full payment will come after the tattoo is completed.

These days, a lot of tufuga prefer the full payment up front and in the more contemporary currency of cash money.

We will still present him with fine mats and other measina (culturally valued treasures) like a siapo, tanoa ma le fue, etc. but these are only symbolic gifts to accompany the cash.

The young man now begins his tatau journey with prayer and instruction.

Receiving a traditional Samoan tatau is an emotional and spiritual rite of passage that can take anywhere from a few days to a year or more to complete.

The physical act of the administering a tatau – boring sharpened, serrated bone deep into a person’s skin – is also extremely painful and inherently dangerous, so this privilege comes with strict rules.

The tufuga will explain to the boy that from now till however long it takes to complete his pe’a, he cannot be left alone, he cannot drink or smoke, he must wash rinse his progressing tatau in the ocean, but never in direct sunlight, and many other rules.

It’s understandable that this young man might feel overwhelmed already at this stage of his journey, but he doesn’t have to face it alone.

He can count on the support of a proud village – who will pray for him, bring him food and drink, keep watch over him, tell stories and sing to to distract him from the pain – and he can also choose what we call a soa.

A soa is someone – usually a sibling or cousin, male or female – who agrees to receive a pe’a or malu at the same time as this brave young man. The same tufuga will direct both their tattoos, which will happen in the same fale (house) so that they can encourage and cheer each other on through the pain.

Finally the day comes when the tufuga moves in to the young man’s home, armed with the tools of his trade and a small army of helpers.

It’s time to begin the tattoo.

I love how they made tatau ink back in the old days.

So you know the Hawaiian kuikui nut tree? In Samoa we call that a lama, but I think its English name is candlenut.

Anyway, the seeds of the lama tree have this woody shell that tufuga would collect and burn in a shallow pit.

Above the pit, they’d suspend a large flat rock to collect the soot from this lama fire, which they would then scrape into a container (e.g. a coconut shell), mix with a bit of water to form a paste, then cover and allow to cure for at least a year.

WARNING: Lama soot is extremely toxic, so this curing process is literally a matter of life and death. Just saying in case anyone decides to make this ink themselves. Please don’t use it unless you know what you’re doing and are absolutely sure it is safe.

I love the way the soga’imiti over at hankefamily.net describes the pain of receiving a Samoan tatau.

“Because the handle of the instrument is struck with some force, the little teeth at its end are usually driven right through all layers of skin into whatever is underneath… the pain involved in applying the tattoo may be a lot greater than by using western-style machines, which only scratch open the skin’s surface.”

I asked my good friend Lina to describe how the pain of receiving her malu compared to that of bearing children. She says:

“With that first tap came the sensation of my skin splitting open… The pain factor? OFF THE CHART, WOMAN! I’d give birth any day!”

No wonder the pe’a tattoo, which is a lot more detailed and dense than the malu, is applied in stages. This young man’s body would need time in between sessions to rest and recover (if only a little bit) from the ordeal.

A Time to Celebrate

And then one day, at long last, the tatau is finally complete.

It’s a time for much celebration in the village. The boy they know and love has endured this journey with dignity and is now a man. A soga’imiti.

As a final act of release, the tufuga cracks an egg on the young mans head, rubbing it in with a little coconut oil. The village presents this tufuga with more gifts (which usually include a bit more money). And then it’s time for the party.

They celebrate with a huge feast, complete with music and drink, and their newest soga’imiti – still sore, but happy and relieved – honours them with a solo dance to show off his intricately decorated legs and torso… a symbol, seared into his skin for the rest of his life, of his love for his family and his Samoan heritage.

Today, traditions around the Samoan tatau are generally the same, but with several significant differences.

These include: you don’t have to be in Samoa anymore to get a malofie, the young man can go directly to a tufuga (rather than through his father/family) now, and young women who want a malu don’t have to have a title or a father with a high title these days.

Not everyone agrees with all the changes, but it’s important to remember that even back in the old days, traditions around the Samoan tatau varied according to family and village.

My teacher Tanvasa first started documenting our culture when he was an itinerant teacher in Samoa back in the 1950s and ’60s. His work took him into just about every village in both Samoas, where he made note of little differences in the way that we practice our Fa’asamoa.

If you continue to study the art of the Samoan tattoo, you’ll discover that protocol and ideals will differ from one Samoan to another.

One school of thought is that you have to KNOW and fully understand the Samoan way of life – even to the point where you can give elaborate Samoan speeches (lauga) or list your ancestors back to Adam (or thereabouts) – before you’re allowed to receive a pe’a.

After his own extensive research, Tanuvasa concluded that, actually, you don’t have to know everything. You just have to be willing to learn and progress within our culture, and in fact… sometimes it’s not possible to learn if you don’t already have a pe’a.

Today we continue to debate the ‘correct’ traditions regarding the Samoan tattoo.

I don’t know the answers to these questions.

Because we’re talking about the culture of a variety of different villages and families – one that is always evolving, especially as more and more of us live outside of our homeland – those answers might not even exist anymore.

I can only describe for you the most common and socially acceptable practices amongst Samoans (as I’ve done in this series of posts about our Tatau) and then offer you my own, personal opinions about how things should be.

Culture is about people.

If you want to identify with a people, even if they’re your own family or village, you have to respect the views of those who were there before you and be sensitive to the beliefs of those who surround you today.

On that note, let us continue to discuss and deliberate and come to our own conclusions regarding the Truth about the Samoan Tattoo. 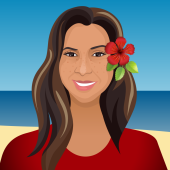 Do I have to be Samoan to get a Samoan tattoo?

The Truth about the Samoan Tattoo (Tatau) – Part 2

The Truth about the Samoan Tattoo (Tatau)